In July 2020, European leaders reached an agreement on a Recovery Plan for Europe consisting of:

It is the largest stimulus package ever funded through the EU budget: a total of € 2.017 trillion to rebuild Europe after COVID-19 with the aim of making it greener, more digital and more resilient. This is a long-awaited agreement because negotiations began more than two years ago and because the conclusion of more than 30 legislative proposals governing the various programs of the Community budget for the years 21 to 27 depended on this agreement. 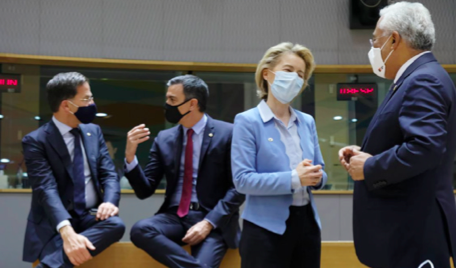 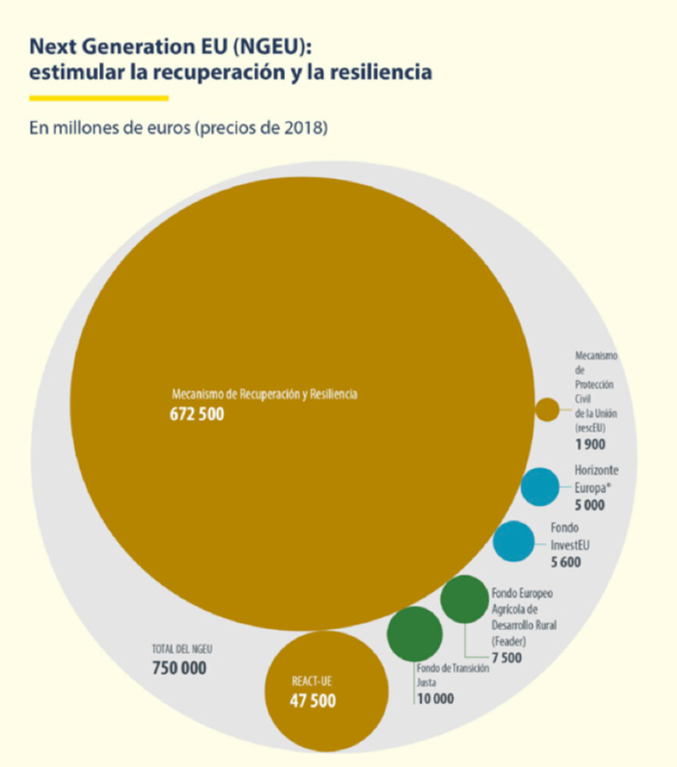 The first EU debt issuance under the NextGenerationEU Instrument was successfully completed in June 2021. The Commission has raised a total of € 20,000 million through a ten-year bond, which will expire on 4 July 2031. This is the largest institutional bond issue in Europe and the largest ever raised by the EU in a single financial transaction. Two months later, in August 2021, the European Commission transferred to Spain the first 9 000 M of the recovery plan España Puede (Spain Can), equivalent to 13% of pre-financing of the total budget of 69,500 million euros corresponding to the Spanish plan.

The European Commission plans to make a second disbursement to Spain in 2021, which will amount to 10,000 million euros for the milestones and objectives achieved. The Commission’s half-yearly disbursement schedule will allow Spain to receive 80% of the planned transfers between 2021 and 2023.

More than 50% of the amount will support the modernization of European economies through:

30% of EU funds will go to the fight against climate change, the highest share ever of the European budget. The package also pays special attention to the digital transition, biodiversity protection and gender equality.

Traditional policies, such as the common agricultural policy and cohesion policy, ultimately do not suffer major cuts and continue to account for almost 2/3 of the budget:

The CAP is reduced by 10% over the previous period (2014-2020). For Spain, it was a red line in the negotiations not to reduce its allocation of this policy. For the new financial period, the total amount of the CAP will be € 343,944 million, which represents approximately 31% of the MFP compared to 35% in the previous period 2014-2020. The CAP will be distributed in two pillars: Pillar I corresponding to the EAGGF which will receive € 34,124 million at current prices, and Pillar II corresponding to the EAFRD which will receive € 8,531 million for rural development (including the technical assistance supplement and the supplement of NextGenerationEU of € 730 million). In the case of Spain, the amount of the corresponding CAP for the period 21-27 is € 47,724 million.

Cohesion policy remains at the level of the current period. Although Galicia is moving from a more developed region to a region in transition -since its GDP is down by 10 points-, its theoretical grant of funds is reduced by ceasing to benefit from the safety network that had been granted for the current period to leave for the first time from the group of less developed regions. The Xunta de Galicia, supported by the Fundación Galicia Europa, has warned about this situation in Brussels, demanding that the regions that are relegated cannot see their theoretical grants reduced. After getting the European Parliament and the European Committee of the Regions to take up this demand in their respective positions, the Common Fund Regulation of the Funds agreed on 1 December finally includes an invitation to Member States to take this factor into account when deciding the internal distribution of funds. At the internal level, states have full flexibility to distribute resources between regions in the same category, and, in the new period, even more flexibility to transfer money between categories of regions. Spain will receive 35,376 million euros at current prices (31,388 at 2018 prices).

The COVID-19 crisis has shown that the EU budget needs to be flexible, so outside the MFF, reserve programs are strengthened in the face of unforeseen situations and a new fund is created to mitigate the consequences of Brexit:

Because of the pandemic, a strong response from the EU has been demanded to help countries with less financial capacity cope with its economic consequences. Based on an informal proposal from France and Germany, the Commission proposed in May 2020 an extraordinary recovery instrument under the name NextGenerationEU, which means an increase in the multiannual budget thanks to the issuance of Community public debt.

It will not be the first time that the Commission has issued debt taking advantage of its good credit rating. It is new that it is of such a high amount and that it is used to thicken the budget, channeling resources through its programs in the form of grants, in addition to loans.

The EU budget will pay interest between the years 21 and 27, as well as the loan capital corresponding to the grants between 2026 and 2058. In the case of loans, the beneficiary Member States will have to repay them.

To contribute to the disbursement of the loan, the EU has committed itself to a timetable for the introduction of new own resources:

The following are the main programs in which NGEU is distributed: